Ghost stories have got to be one of my favorite things, whether at this season or any other. For that reason, I am so pleased to welcome pub sister M.S. Kaye with an interesting post on character names and her new book, Awaken From Death.

Ilona is sweet and sheltered, as well as brilliant and fearless. As one of only a few people in history to be half ghost, she has abilities she doesn’t understand and can’t always control, and the strength of her abilities is intensified by the age of her soul. She’s continued to come back to earth, choosing to be reborn over and over, to find Atomis. 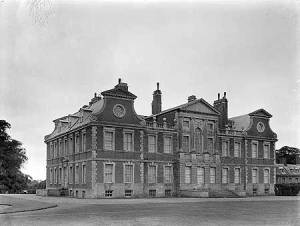 The inspiration for the name:

“Raynham Hall in Norfolk, England, is home to the subject of one of the most famous ghost photos ever captured, the Brown Lady is named so because she appears in a rich brocade brown dress. Though reports of sightings have waned dramatically since the photo was taken in 1936, sightings before then had been reported by some fairly reputable sources. My favorite account is from a Major Loftus, who was staying at Raynham Hall in 1849. Retiring to bed one night, he and a friend named Hawkins observed a woman in brown brocade who vanished as Major Loftus approached her. Determined to confront the apparition, the next night he returned to the same spot and saw her again. He was horrified to see however, that when he looked into her face he saw only two black sockets where her eyes should have been. Unsettling to say the least!” ~www.listverse.com 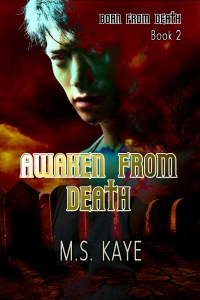 Book 2 of the Born from Death series

The only emotion Ilona can muster is anger for the death of her mother. Barely engaged in life, she focuses all of her energy on finding and punishing her mother’s killer.

Since Ilona can see ghosts, Archer has to find unique ways to hide while watching over her. When Ilona is in danger of being mauled by a dog, he desperately tries something that shouldn’t be possible. And yet he succeeds. This is just the beginning of his discovery of who—what—he truly is.

Lettie continues to interact with Ilona, her one friend, even when a Messenger warns her. Eventually, Lettie remembers the ancient connection Archer and Ilona share, as well as her part in the punishment Archer bore as a result of that connection. 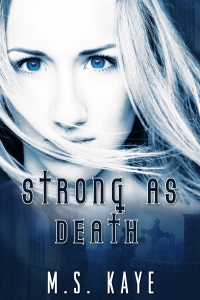 Book 1 in the Born from Death Series

Ilona runs from her sheltering mother in order to find the truth, why she’s seeing people who are invisible to everyone else. A mysterious boy named Archer guides her through Brooklyn and introduces her to Hendrick, the man who claims to be her father—though he died in 1890. Ilona must discover not only what she must do to rid the city of Soll, a sadistic and powerful spirit, but also what it means to be half ghost. She proves what her mother told her—love is stronger than death.

M.S. Kaye has several published books under her black belt. A transplant from Ohio, she resides with her husband Corey in Jacksonville, Florida, where she tries not to melt in the sun. Find suspense and the unusual at www.BooksByMSK.com.

Sneak Peek at Awaken from Death:

The blond boy didn’t walk up to a urinal or into one of the stalls, or even up to the mirror. He stood in the middle of the room.

Something moved backward away from him. Out of him.

She recognized Archer’s shiny black hair and strong frame even before she could see his face.

The blond boy shook his head and looked around. “Fuck.”

Lettie stared at both of them.

The blond boy turned, leaned his hands on the counter, and looked at himself in the mirror…not the way people usually looked at themselves. It was more like he was trying to see something more than was in the reflection.

Archer watched him, as if waiting for him to see something.

Then Lettie understood. Archer hadn’t merely inhabited the boy—he’d possessed him. But there were only a couple ways that’d be possible—if he were half ghost, or if he…

A memory struck Lettie like a horse galloping across a battlefield. An ancient memory. Lettie had been around since the beginning of time on Earth, but most of those thousands of years she let slink around the crevices of her mind. It was mostly just walking the bridge with the newly deceased. There were a few memories, though, that burned into her every time she let herself pull them forward. And burned was precisely the right word.

She knew—or rather, remembered—why Archer would never leave Ilona.

We’re talking giant purses and big girl panties today. Please help me welcome Kristi Rose as she reveals the contents of her purse in this next installment of #ProjectPurseDump! 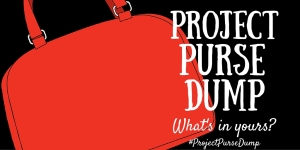 Hey y’all. It’s my turn to share what I lug around in my giant purse. I don’t always carry such a monstrosity but after I had kids the size of my purse grew exponentially and has stayed that way :-). 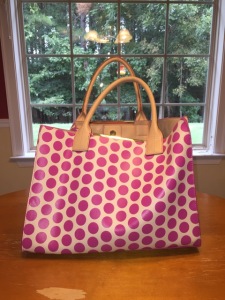 First, I have to share that I scored such a good deal on this purse, like 80% off, and my daughter found the matching wallet which cost me $10. So wow- that never happens to me. I’ve never even had a purse and wallet that match so I feel like a girl who is definitely wearing her big girl panties. 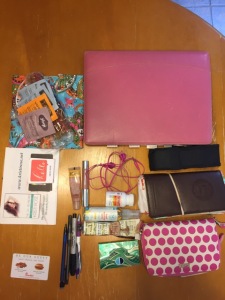 Ok, let’s get to it. Starting at the top and going clockwise this is what you’re looking at.

Sometimes, I swap this out for my laptop. I never carry both or my purse would weight 10 pounds.

That’s it. That’s me in a nut shell. Oh, Yes, I carry feminine products. I see here that I have forgot to reload on those. Whoops.

Thanks Tracey and Jessica for letting me be a part of this. I love having this insiders look at everyone’s purse:-).

Kristi Rose was raised in central Florida on boiled peanuts and iced tea. She’s been lucky enough to travel the world but now, a wife and mother, she’s resigned to traveling to the grocery store. No matter where she is, she enjoys watching people and wondering about their story. That’s what Kristi likes to write. Stories about everyday people, the love that brings them together, and their journey getting there. Kristi is a member of RWA. Romance Writer’s Weekly and The KickAss Chicks

There are a lot of romances out there featuring incubi, or sexual demons, as heroes. My upcoming release Night Lover has an incubus antihero, but I wanted to present an alternate picture, one that reflects the legend more accurately.

These are creatures to be feared.

We’ve all seen John Henry Fuseli’s famous painting. Yes, there is a sexual pull on the victim, a strange allure. However, there is terror involved as well.

In researching this book, I was amazed at how many chat rooms still exist in which alleged victims claim to suffer from incubus attacks. This sort of phenomena can paralyze victims and drain them of energy. There are numerous accounts in books of the paranormal, dating back centuries.

The symptoms can be horrific. One may experience a choking sensation or inability to breathe. This is because incubi are said to sit on the victim’s chest, cutting off the air supply. My heroine Renata experiences this as well. The victim may begin to feel listless, unfocused. They lose all vitality and strength. Their appearance begins to show the strain. Reports detail dark circles under the victim’s eyes or pale skin. Some accounts claim an incubus can father a child with its hapless victim, creating a half-human offspring. As the victim’s health deteriorates, a victim might contemplate suicide.

In Night Lover, my incubus Hugh suffered tragedy in life, a tragedy that was amplified when he was cursed by a man who worshiped Satan. He despises his fate but cannot seem to alter it. He’s been trapped on a torturous plane, destined to seduce and lead women to destruction.

Can Renata, his latest victim, save him? And will she be able to save herself in the process?

I hope you will read Night Lover and find out.

Canadian soprano Renata Bruno is tired of waiting for her big break. Unfortunately, her boss, the conductor of a chamber ensemble, sees her as little more than background material. When she learns of an opportunity to sing solo with a different troupe in England, she knows she must seize it. Especially when she hears the group is to perform Mozart’s Requiem, her favorite work.

As soon as Renata decides to make her move, a strange, sultry presence invades her life. She begins dreaming of a man, one who makes love to her, bewitching her. It isn’t long before her night lover leaves startling proof of his nocturnal presence, making her doubt her senses.

To compound her discomfort, she learns her new conductor is the college boyfriend who broke her heart years ago. As Renata grapples with old hurts and renewed passion, she must also fend off the increasingly fervent advances of her night-time visitor. She realizes she is under the influence of an incubus, a sexual demon.

It becomes harder to resist the incubus when she learns he has a name and had a tragic history. The more she discovers about his past, the more she realizes they are linked in more ways than one. Renata begins to rediscover love and her sense of faith, but will it be enough to save her night lover from an evil curse? And will it destroy her in the process?

Margaret reached for my hand and squeezed it. “I’ve taken it upon myself to speak with some of the religious leaders in my community…”

“No, but you said yourself you acknowledge intangibles. You recognize the existence of spirits, if not God.” She handed me a sheet of printed paper with several stanzas on it. “These are prayers to ward off an incubus.”

I skimmed the paragraphs and shook my head. “Away with you, Satan? May the Lord Jesus Christ rebuke you? I’m not comfortable with this.”

“Well, if you won’t read the prayers, continue to read his journal. Perhaps something there will resonate with you.” She squeezed my shoulder. “You may have invited him in, Renata, but he came because he recognized your vulnerabilities. He knows the chink in your armor. He understands your deepest fears. Do you?”

A Reluctant Attraction is on Oprah Daily’s 50 of 2021’s Most Anticipated Romance Reads! 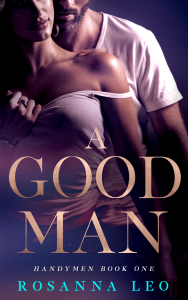 A Reluctant Attraction reviewed by Long and Short Reviews!

A Reluctant Attraction is May’s Book of the Month at The TBR Pile!

5 stars for A Reluctant Attract at The TBR Pile!

Vice and Al Dente are finalists in the 2018 Limitless Press Reader’s Choice Award!